It was exactly one year ago when my boyfriend of 7 years (and 12 days) proposed to me. Before I tell you how he asked, you should know a little bit about us. Sahir and I met when we were children and began dating was he was 16, and I, 15. Our tale of being “high school sweethearts” is timeless. As we grew older, we grew together and after 2 separate high schools, 2 separate colleges, our bond remained strong. Fast forward a few years and here we were. So here is the unabridged story of how he asked:

On Saturday, February 9th, 2013 at 10:06 AM, I woke up to the unfamiliar chime of a Twitter alert. With my eyes still nearly shut, my vision blurred into a clear image of a public message from Sahir asking me to please take a quiz. The exact tweet read, “Hey honey, can you answer a few questions for me? #loveyou @SimplySabrina docs.google.com/forms…” Dazed and confused, I opened up his tweet to find a very specific type of quiz that recalled detailed moments from the past 7 years. The questioned asked things like “What was my parking spot number junior year of high school?” and “What toppings were on the Heart Pizza you got me for Valentines Day 2011?” At this point, I knew something was up so I called Sahir, only to be sent to voicemail -twice. I then proceeded to text him and ask why he wouldn’t answer my calls, to which he responded – only tweets no texts today. Well, lucky for me, I have a fairly good memory and swiftly answered the questions. I also sent him a tweet asking why the intense quiz, to which he responded, “Just trying to jog a few memories today ;)”

Now at this point, I had a pretty good idea that something was going to happen today, especially since we had previously discussed the seven year mark – but I didn’t know for sure and didn’t want to get overly excited so I kept to the plan. A few minutes later, my phone chimed again and I had another tweet from Sahir saying “So honey, i’ve decided we are going to have lunch. I’ll see you soon!!!” I scrambled to find something to wear but with no indication as to where we were going or for how long, I was stumped. I tried to ask questions, but he just said he wouldn’t tell.

When Sahir arrived, he came to my doorstep with two white roses. I thought they were beautiful and took both from him. He then proceed to take one back and tell me that it wasn’t for me. He then bypassed me and went to find my mother and handed her the rose, telling her “this one is for you” In case my heart hadn’t already melted, it did by that point. Sahir kept telling me that I didn’t need anything else and that we had a schedule to keep. As I gathered my things, Sahir told me he was going to start the car – and yet again, my phone chimed. New tweet: “@SimplySabrina New Rules! Every place we go, you have to tweet the location!! #loveya” Well, I collected my rose and went to the car – excited and anxious about the day I was going to have.

The first place he took me was a Carrabbas near our old high school. This was the exact location that we went to before our first date, homecoming in 2006. When we got to the restaurant, he ran to my side to open my door and we walked in together. The waitresses offered mischievous smiles and told Sahir that our table was waiting for us. In the very booth that we sat in 7 years ago, there was another white rose. We ate a wonderful lunch and he asked me if there was anything I needed to do. I quickly tweeted our location and we paid, took a photo, and left.

The next place we went to took me by surprise. As we drove down a vaguely familiar winding road, he parked in the most obscure of placed – spot 510 at our high school parking lot. Although it seemed out of the blue, I quickly realized that the location was planned. There in our spot was another single white rose. Sahir quickly hopped out of the car handed me the rose and finally started to explain. He told me that the quiz offered clues for our daylong scavenger hunt and he didn’t actually expect me to get them all right (silly boy!) The only other bit of information that he offered me was that we would be seeing landmark sites that defined our relationship – including our first date spot, high school, and many others. We snapped a picture and he told me that we had a appointment we needed to make so it was off to the next location. At this point, I was pretty sure that something eventful would be happening — but still unsure of the when. I tweeted our location as Sahir began to drive.

This drive was a bit of a distance. He told me he considered blindfolding me, but opted against it. Through our hourlong drive we reminisced about the course of our relationship, and the time went by extraordinarily fast. Before I knew it, we were in Athens, GA – our college town. Sahir drove me to an unfamiliar building where we asked me to walk in before him. When we entered, I saw my best friend and college roommate standing with a white rose in the lobby of a Luxury Salon and Spa. The clerk told me that she was ready for mine and my roommates manicure, pedicure, and spa appointments. I was shocked to see my best friend after so long, and couldn’t believe that Sahir had set all of this up. I turned to Sahir, and he gave me a quick kiss, told me that he had some other things to take care of, and left.

After the salon, my tightlipped bestie would not spare any details. She told me that we were given a mission to pick out a new dress, shoes, and jewelry for tonight. She also promised that she would make sure that we found the perfect one. So we headed to the local boutiques in downtown Athens to try one some dresses. We were a few stores in when I saw Sahir arrive with two things. 1) My favorite Thai Iced Tea from a local restaurant and 2) another white rose. He and my best friend’s guy came with us, store by store and Sahir eventually pointed out a dress in the window. He brought it to me to try on and in it’s black and white simplicity, we knew it was the one. Soon afterwards, we purchased some shoes and jewelry to match and I was for lack of a better term, ready.

The day raced by and I was reminded to continue posting tweets about where I was, and what I was doing. After our shopping adventure, I was handed a key to the Penthouse Executive Suite of a fancy boutique hotel and told to enjoy getting ready and meet Sahir in the lobby at 8 PM. One problem, I didn’t have any of my stuff! Low and behold, in the room was my overnight bag packed with all of my essentials (including my favorite hair products) and a single white rose with a note. I soaked in the day for a moment before I quickly got dressed and headed downstairs.

Our last location is one that I hoped for. There is a famous little restaurant in Athens that Sahir and I never ate at as students. However, when we moved out of our apartments after graduation we made one final stop before heading out of the city – and it was to this particular restaurant. When Sahir parked, we scrambled through a crowd of the no-reservation policy, Saturday rush. In hindsight, I should have realized when the Maitre d’ told the party before us that there was a two hour wait, and seated us immediately – something was up.

Even though night had fallen, I still didn’t think that this restaurant would be the place. I happily ate my dinner and didn’t think twice of the fact that Sahir was barely picking at his. We enjoyed a lovely meal of our favorite foods and while he picked his phone up once or twice – it wasn’t any cause for concern. When I noticed him a bit distracted, he told me that he wanted to keep it a surprise, but our best friends from earlier were coming to have dessert with us. This was a bit of a tradition for us, so I didn’t hesitate or question why. I said that was great and suggested we pull up chairs. A few moments later I see them walk through the door and get up to give my best friend a hug. She holds on a little longer than usual and when we eventually let go, I turn to return to my seat – and there he was on bended knee. The entire restaurant seemed to gasp at the same time. He told me all of the amazing things that I could have ever wanted to hear and they were personal and intimate. Our friends took photos and videos, and then he said the words I had been waiting 7 years and 12 days to hear him say, “Will you, Sabrina Nea Nooruddin, marry me?”

I squealed “YES!” and the restaurant broke into applause. We shared our moment and then thanked everyone and returned our table. The owners of the restaurant congratulated us and offered us dessert. While we ate, we had many guests give their congratulations and ask to see my ring. The evening couldn’t have been more perfect. After dinner, we took some quick photos near the university landmarks and made calls to our parents. He had, of course, without my knowledge already spoken to my parents – two weeks ago and even brought his parents to my home while sending me out with a girlfriend for a late night dinner. We celebrated and shared the news with everyone dear to us and was – almost all of it. 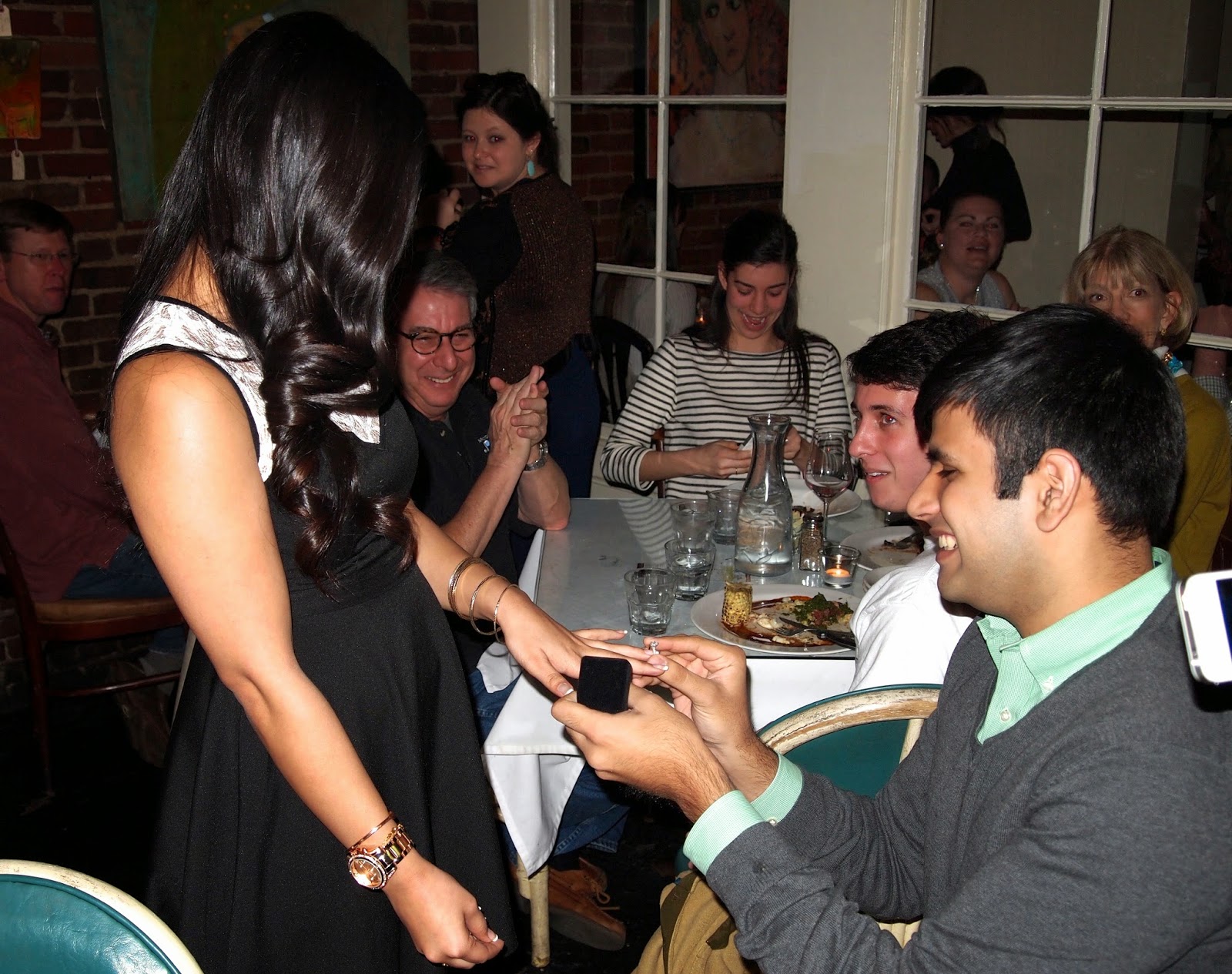 He told me that night that by committing our lives to one another we were starting something new. He wanted this proposal to remind me of all of the amazing moments that we have shared, which is why this evening would be an annual event. He told me that every year we would recreate this special date. On this date – he would have me pick out a new outfit, bring me to the same suite, and get us the same table at our favorite restaurant.

I think every girl’s story is special because it reflects the relationship that her and her partner share. This is mine, and for the first time (in such extreme detail) I wanted to share it with you. Below are screenshots of the tweets and a photos from the evening. Thanks for reading my special story. 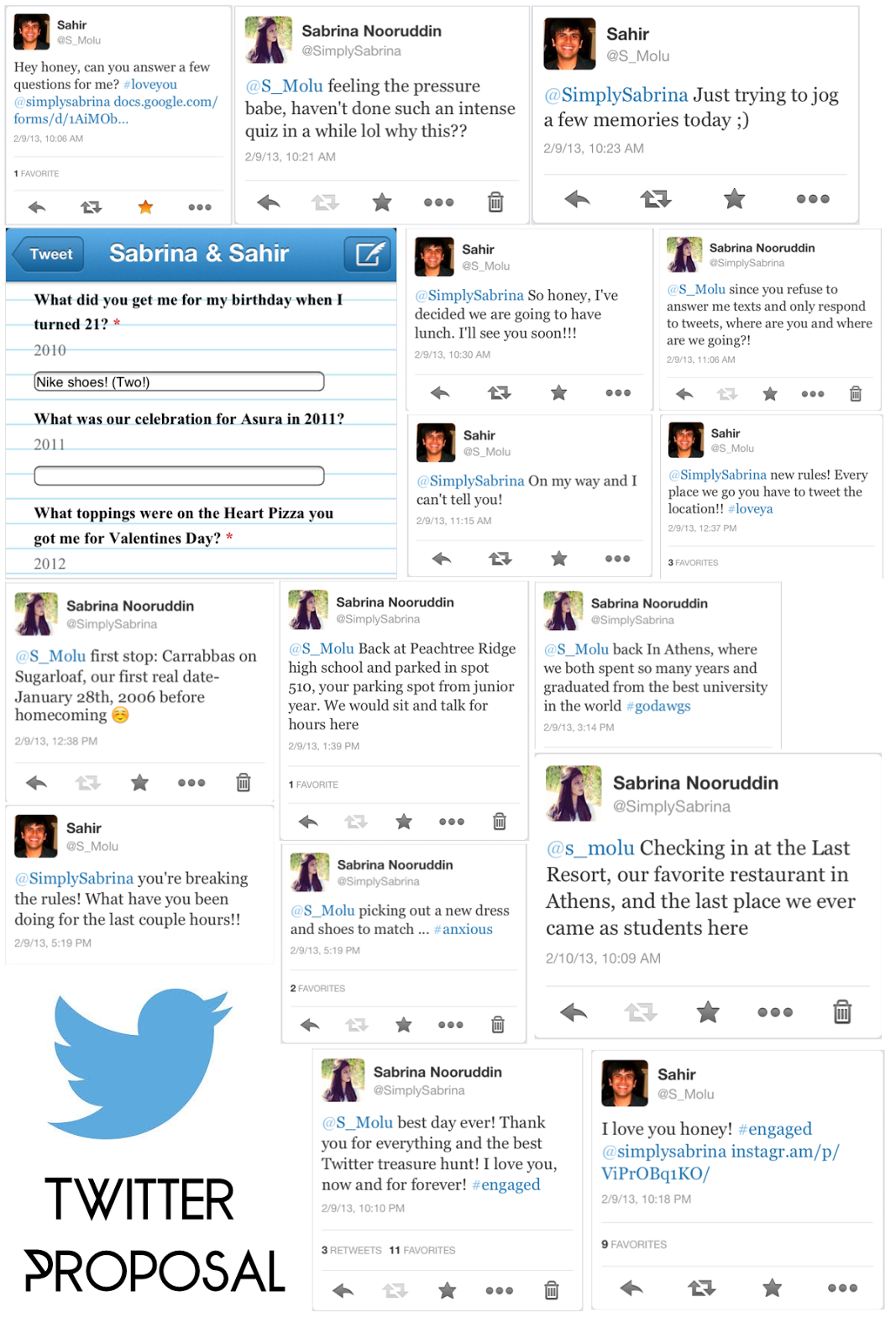 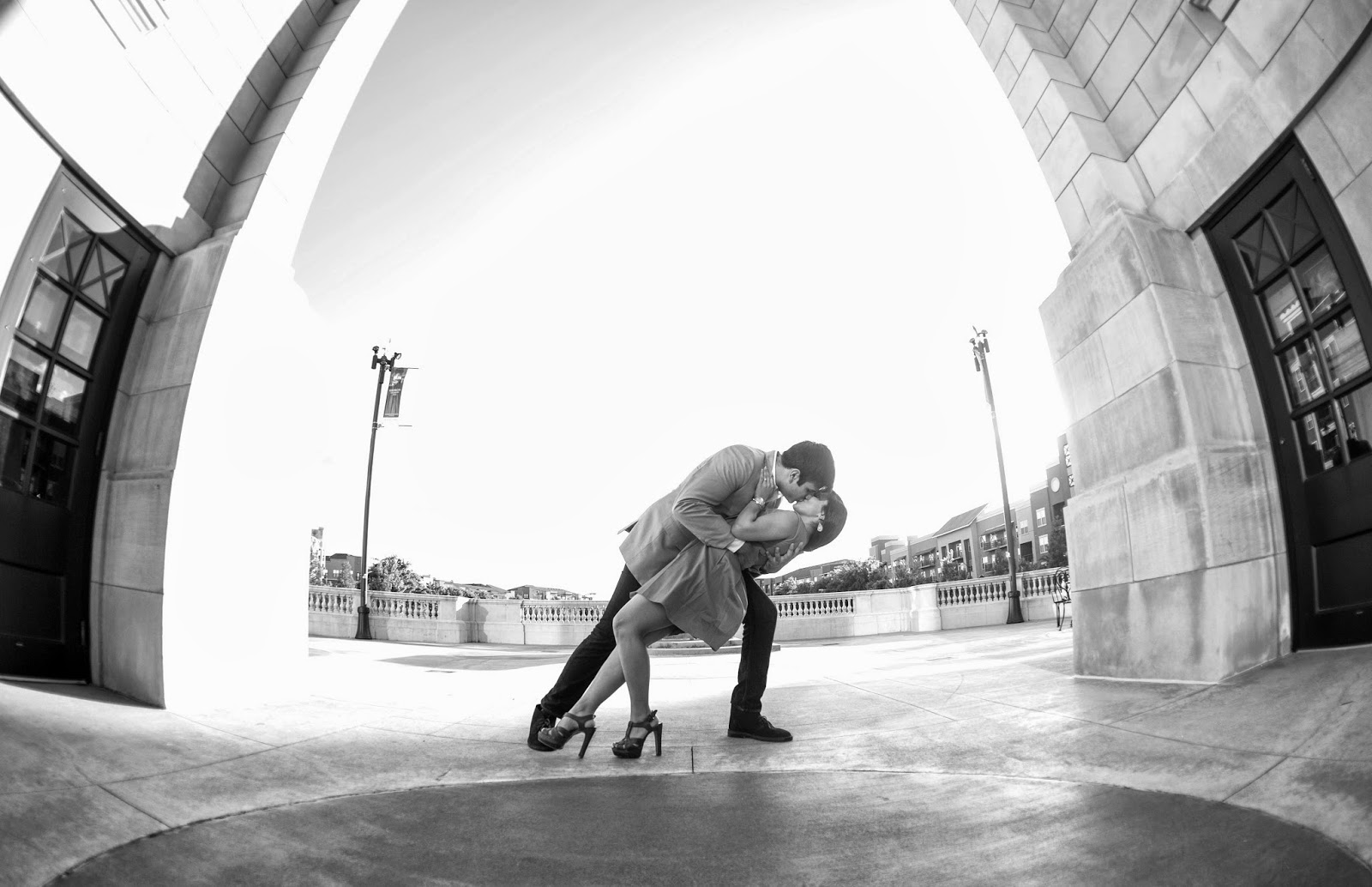 Hi, I’m Sabrina Nooruddin Molu, the charming and witty voice behind Simply Sabrina. In a city of transplants, I’m a born & bred Atlantan with a love of storytelling and an obsession with boba tea. Welcome, I hope you stay a while.